Here they are, just finished and ready for the exhibit and auction.
If you are interested in being a sponsor, please go to the website
www.pawsforapurrpose.com 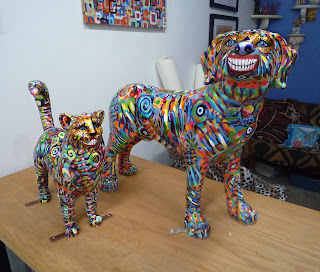 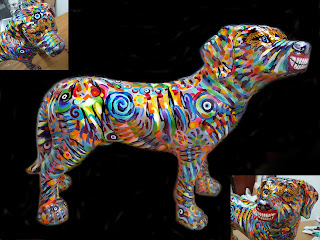 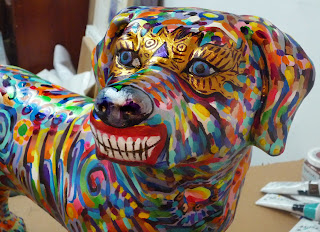 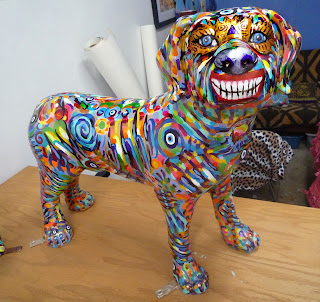 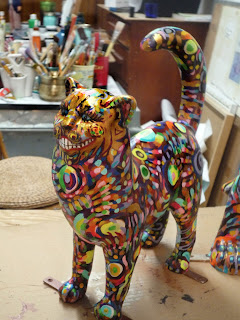 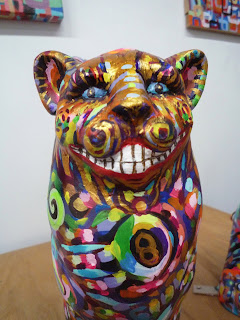 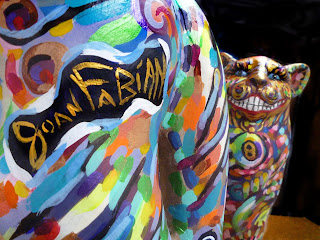 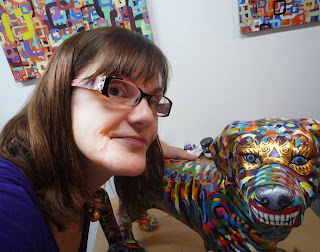 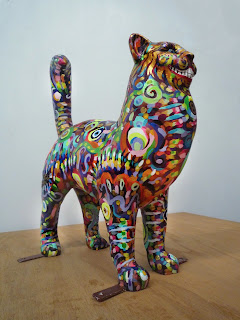 Posted by Dellview Delly at 9:40 AM No comments:

Looking good I might say....will be done by next week I believe. Will go to the Paws for a Purrpose Auction to raise money for humane treatment of animals in Texas! 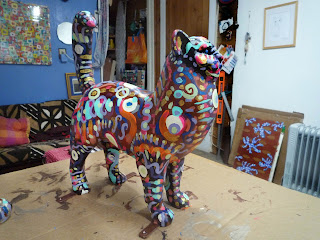 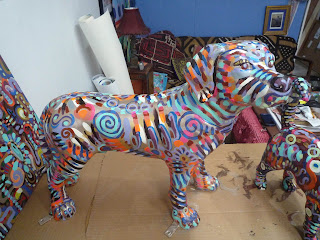 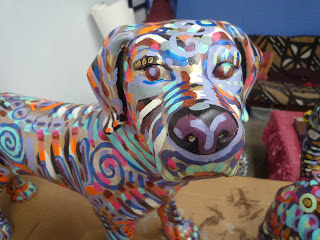 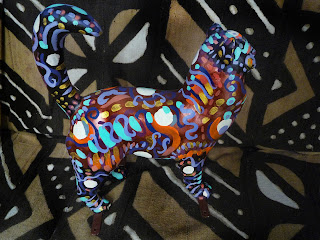 Posted by Dellview Delly at 11:14 AM No comments:

Dog and Cat in Progress for Paws for a Purrpose!

Working hard in my studio and these animals are getting there. As always I like to take pictures of the progress made. Now they are indeed colorful. Be sure to click at the bottom to watch the video. 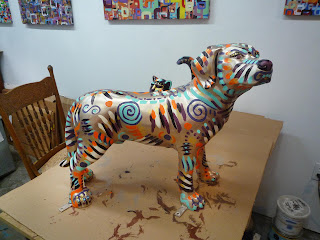 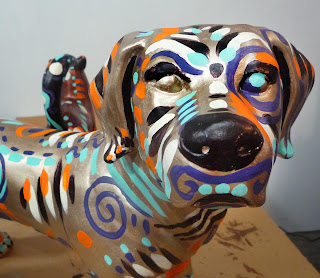 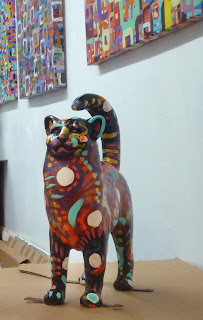 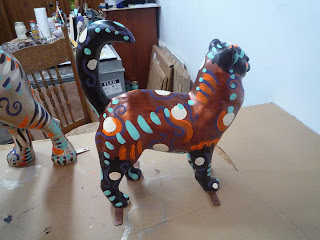 Posted by Dellview Delly at 2:40 PM No comments:

PAWS for a PURRpose is a Texas statewide public art event consisting of 60 beautiful works of art on fiberglass molds of the pets we so dearly cherish. Dogs and cats of different sizes, shapes and poses will be included along with two mini cows and a few surprises. Internationally known artist Allison Gregory  and my dear friend has selected 43 of some of the top artists in Texas (that includes me) to participate in this event.

Many of these artists produce museum quality work, and all were selected because of their unique style and overall quality. In June, South Texas College of Law will turn the 9th floor of the law school into an art gallery and host a special reception to unveil the art.

The “gallery” will be open daily from June 15-August 31. During the months of September-November, the art pieces will be moved to upper-end retail stores, hotels, car dealerships, museums, restaurants, and law office establishments in Houston, Dallas-FortWorth, Austin, San Antonio, Wichita Falls, and Amarillo to create awareness of the upcoming celebrity-hosted live auction of the art. The auction will be part of a gala to be held on Thursday, November 7, 2013, at the Houston Downtown Club from 6-9:30 p.m. Proceeds from the sponsorships and the live auction will support the Texas Humane Legislation Network (THLN) and South Texas College of Law’s Animal Law Clinic (STCL).

I picked up my "animals" on Tuesday, a cat and a dog and here they are sitting pretty in my studio ready to be painted! 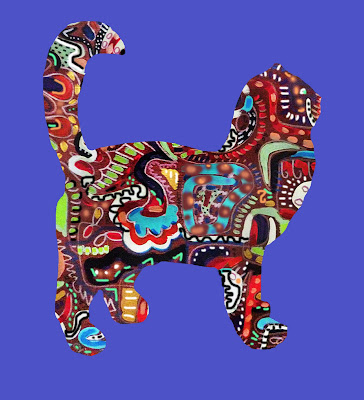 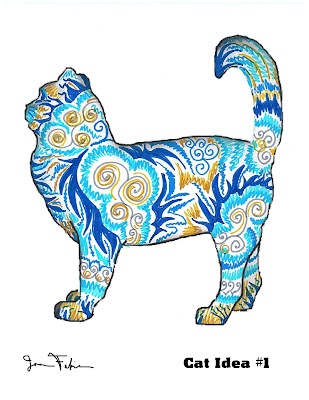 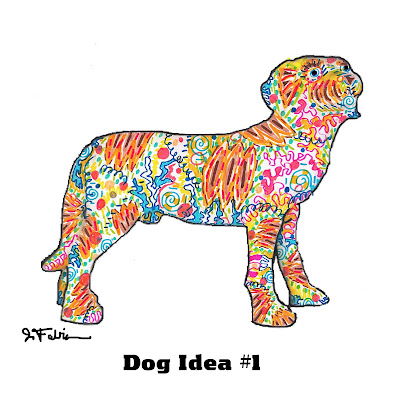 Above are the first few sketches on ideas for the painting project. So many ideas and I am itching to start but I want to explore the possibilities.  Go to the link to learn more about this project
http://www.pawsforapurrpose.com/index.html
Posted by Dellview Delly at 2:38 PM No comments: 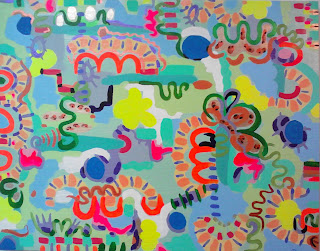 Been away for awhile but a friend encouraged me to get back into the swing of things with my blogs and art. I will try to post regularly.
November was a sad month, lost my mother to a stroke and it still is a big shock for me.
Let us hope this year is better.
The painting above was done in 2012 and just thought I would put it up.

Posted by Dellview Delly at 7:14 AM No comments: 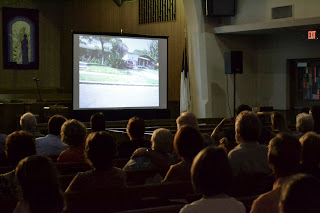 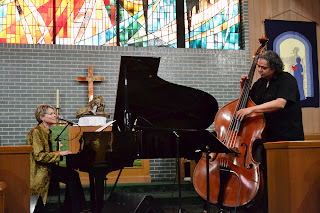 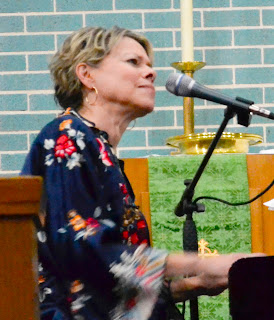 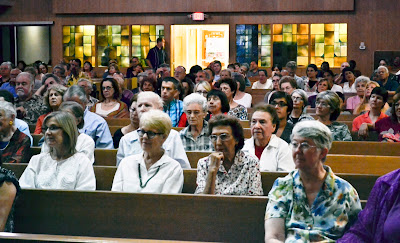 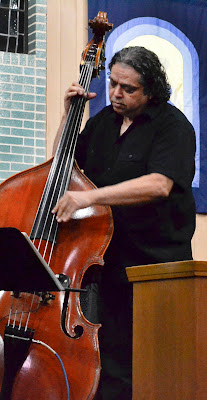 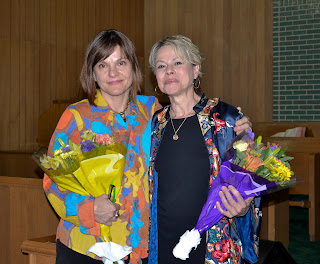 Smashing Success! The Dellview Concert!
On September 21st 2012 Dellview was in celebration of our neighborhood's rich history. Bett Butler and Joel Dilley created a wonderful evening with song, music, stories and a engaging video that was a collaboration between Bett and I in gathering images and stories from the residents.
It took place at St.Marks United Methodist Church and the Art Beat Committee of the Dellview Area Neighborhood Association really worked hard to bring this to its glory!
We filled the house! As you can see from the pictures, many were the elderly neighbors that bought their home in Dellview in the 50's. There were many of Bett and Joel's fans too.
As artists working together, Bett and I really do well when we set down to do a project. I admire her professionalism and dedication to her craft. It was a lot of work coordinating everything for this big production but the fruits it bore are everlasting. Bett blew the audience away when she honored the first residents that lived through WWII by singing Brother Can You Spare A Dime? Every song they performed they did with their hearts and everyone was captivated. I was the "mistress of the ceremony" and ran the video and slide presentations. I also played a video I did for this event called
Dellview Drive and Joel's music was the soundtrack.
Maybe this will be the start of honoring other old but not ancient neighborhoods in San Antonio but I really wanted to bring attention to what we have here in Dellview. Obtaining a CAAP Grant from the city of San Antonio Cultural Affairs was not easy but it help defer some of the big expenses of this free concert celebration.  It indeed created a stir and we are continuing the call for more stories and photographs from the past to add to the history documentation of Dellview, a neighborhood consisting of mid century homes and warm hearts.
The big publicity we received was due to Jim Beal's article in the San Antonio Express News that got everyone's attention....I knew it would having Bett and Joel along!
The concert and the videos will be available on a DVD for members of DANA- Dellview Area Neighborhood Association. Everyone is invited to be a "neighbor" of Dellview. It costs only 12 dollars a year and you will receive our bi-monthly newsletter (which I design btw) in addition to the DVD when it comes out.
As artists, we never sleep and this was one project we all are happy to have accomplished successfully.
The concert was dedicated to the memory of Janice Petmecky, a dear friend and former Board Member of DANA.

Posted by Dellview Delly at 2:39 PM No comments: 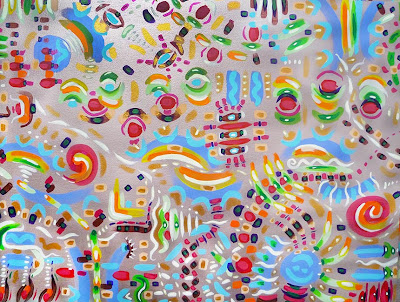 "When I created this work I was thinking about the atoms and protons that make up our universe but we cannot see. If this harmony is disturbed peace and progress can not take place. So, using my love of color, form and humor, I created a world that is full of activity, representing the cosmic order. I like to think of the Australian Aboriginals that make those colorful and detailed paintings based on their dreams of their ancestors. We only seem to use part of our brains so the other part maybe full of that inner knowledge." Joan Fabian

Several artists have created a Peace Dove, in their own chosen style and medium, to be exhibited both indoors at The Historic Jackson Ranch and outdoors in the ranch Chakra Garden. You can still purchase the the one I did shown above at the benefit sale and proceeds benefit the Roots and Shoots environmental rescue program created by Dr. Jane Goodall http://www.rootsandshoots.org/. This event was created and curated by Patrice Villastrigo, an artist, musician and healer. Please call her for an appointment to view the artwork at the wonderful Jackson Ranch!


Posted by Dellview Delly at 2:08 PM No comments: